12 aug 2011 — ​Interview with programme manager Marcos García from Medialab Prado in Madrid on becoming 'a lab of labs'.

Over the past few years we’ve seen Medialab Prado in Madrid develop in to an active and exciting centre for creation that dared experimenting with many different themes (from data visualisation to urban screens) always with an approach of openness to participation. In Virtueel Platform’s effort to keep the sector linked to interesting developments in e-culture at home and abroad, we couldn’t miss the opportunity to interview one of their programme managers, Marcos García, who visited us in 2009 with the support of Virtueel Platform’s Visitors Programme.

Our Spanish intern Carlos skyped Marcos recently, to find out how the Medialab is operating in the current cultural and political climate in Spain and to find out more about its plans to become 'a lab of labs'.

Medialab Prado is, in the words of Marcos Garcia “an open lab that provides a platform for collaborative prototyping”. With this model, they provide a framework for experimentation and offer “a space for people to come together to share skills and knowledge around a project”. It was born as Medialab Madrid in the Conde Duque cultural centre, but, according to Marcos, “it was never a small project, in fact, its approach was international from the beginning”. They transformed from Medialab Madrid to Medialab Prado as the result of a continuous process of development, gradually turning their focus from exhibition into production.

Marcos explains that Medialab Prado (MLP) works through an open call system. First they make the call “for ideas and projects and select those that they will develop amongst the presented proposals. Then they make an open call for collaboration on those selected projects, since they are developed through teams of collaborators and led by the project promotor. Whilst some of their activities require a selection after the call for collaborators, others are fully open, such as the Friday open lab, an open platform for idea presentation that sometimes are developed into projects.

It’s key to MLP’s philosophy and functioning to be “open to everybody” and, according to Marcos, visitors are “not only allowed but encouraged to participate”. There’s a great diversity amongst their visitors and participants, but many have university degrees and are familiar with digital culture.

So how does this open approach relate to the 'open culture' in general in Spain? Marcos is less interested in open source projects per se, “but more in the implications it has to construct communities and develop social innovation, and how the Internet facilitates cooperation and collaboration between users and sharing knowledge in projects of all dimensions”. He also highlighted that at Medialab Prado they try to bring that to a physical space that is not just a content transmitter but a lab for experimentation and production. Marcos explains how they believe the proliferation of hack labs and hack camps, the rise in the use of creative commons licenses or the growth of projects that are representative to the culture of open like Wikipedia are all indicators that it’s a healthy and growing force, and at MLP they promote this open culture.

“it will be key to find good evaluation methods that will allow us to measure the influence and social value of our cultural programmes”.

Medialab Prado is funded by Madrid’s city council, and according to Marcos, in spite of the local government’s weak economic situation “they’ve always showed us their absolute support. MLP is a programme created by the "area of arts" by the city council and is seen as a good way to fully develop the potential of digital culture and build a more participative cultural institution model that is more open to participation by users and visitors”. Even so, it’s still surprising that given the current financial situation, at MLP not only are they not expecting funding cuts, but an increase in funding that will allow them to start running a new location, which is much bigger than their current space.

Marcos also points out how, in the current economic climate, “it will be key to find good evaluation methods that will allow us to measure the influence and social value of our cultural programmes”.

But of course not everything e-culture in Spain is done by Medialab Prado, so we asked Marcos to tell us a bit about their connections to other organisations and the status of digital culture in Spain. MLP has “ongoing relationships with diverse organisations locally and internationally”, on one hand, the locals, such as EOI (Industrial Organization School), the universities, (with the organisation of joint workshops, collaborations with teachers and research departments…), Matadero, Tabacalera, Dorkbot festival…

On the other hand there are some national (Laboral, Arteleku, Hangar…) and international collaborations in the US, México, Peru. It’s surprising how “all this networking activity is developed by the organisations involved, as in Spain there is no institution to support the e-culture sector and promote connections between different organisations”.

Although universities are mentioned as common collaborators, Marcos makes it clear how in his opinion “universities are not being really agile in the adaptation to using the resources that new media offer, and there’s some delay when compared to universities and art academies in other countries such as the US, UK, or the Netherlands”. But he also points out that “in all institutions certain efforts to include new tools and digital culture within the study programmes can be observed”, although for the most part, “these efforts are more individual than institutional, making it slower and more complicated”.

“The core question is how institutional models change through digital practice."

Marcos also points out that there’s barely any e-culture policy support in Spain, and that it’s barely present in museums and classical cultural institutions. There seems to be a tendency to limit the vision of “new media based art as a new discipline of contemporary art that defends contemporary art as something to be considered for exhibitions, festivals etc.” whereas he thinks that although that is of course important and interesting, “the core question is how institutional models change through digital practice. This means not only having biennales and festivals structured in the same way they were 50 years ago, exhibiting net art and e-culture projects, but going further in the new models of open cultural institutions that new media enable”.

Among the many fields of activity of Medialab Prado, Urban Screens got a leading role in August 2010 with their participation in the European Media Facades Festival, a “very satisfactory experience with a really interesting project exchange”. Talking about this experience, Marcos comments that it w ould be interesting to “focus more on the critical analysis of the use of urban screens”, but he also declared that the continuation of this line of work in Medialab Prado is uncertain given that they “focus in experimentation and prototype development, which might not be fully working and functional, meanwhile, when you present something in the public space on an urban screen, it must work, so you lose a certain amount of freedom”. Nevertheless, there are a good number of new urban screens projects currently up and running in Spain (C4 in Córdoba, Tabacalera and Callao in Madrid…), so it’s a growing field.

So where does Marcos see the Medialab in ten years' time? Marcos looks forward to working "as a lab of labs, a network of Medialabs connected and distributed around the city” whose work would be based in the methodologies, context for experimentation and community that they are building today. 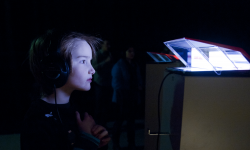 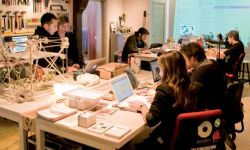