25 feb 2008 — The twelfth edition of Sonic Acts, 21-24 February 2008 in De Balie in Amterdam, explored the cinematic experience in the light of digital media and new technologies. Drawing not only a wide variety of speakers and artists, but also a diverse audience Sonic Acts brings together a mixture of science, art, performance and theory. In constructing a comprehensive overview of what constitutes a cinematic experience, this mixture touches upon notions of immersion, interactivity, immersion, illusion and transformations of cinema. Although time and space prohibits me to give you a full account of the proceedings I will bring to your attention how we can defeat time, and how simultaneously to continuity of time shapes our illusions of today and tomorrow.

Time-defeating Weaponry
Walking into the theatre at De Balie a monotonous, low, almost quivering sound hails me to immerse myself in the unknown world of drones and defeat time as the entry in my booklet exclaims. Apparently the drone is an almost uniquely human produced sound, as only one creature in the animal kingdom is able to produce it, being a Caribbean fish, as Mike Harding tells us. The Britsh curator, produces, lecturer music publisher Harding places electronic drone music in the tradition of coral music and wind instruments. The formal musical structure of drones is basically limited to a temporal dimension. Harding exclaims that although it is nearly impossible to define a drone it typically lasts longer then a human breath. In it's usually monotonous tone the drone has the ability to defeat the sense of time for the listener.

The word 'drone' itself, finds its roots in unmanned military aircraft that scout enemy territory. Moroever, electronic drones are often associated with masculinity and alienation. Although both Joachim Nordwall, director of the Swedish label iDeal, and Carl Michael von Hausswollf, composer and leader is the field of radical sound, seem to oppose this notion in their work. Both musicians express that drones in a way bring back feelings of the past, of their childhood. Especially von Hausswollf declare that the drone brings him in a meditative state, where non-electronic and non-western concepts and religions can not. Nordwall emphasizes not so much this meditative quality of drones as well as it's ability to recreate past experiences. For Nordwall the drones he creates are a constant nostalgic attempt to bring back a room in which he used to hang with his friends.

The defeat of time is apparent in both artists, while the industrial associations with electronic music floats to the background in their work. In the creation and listing experience of drones the Bergsonian schizos between actual en experience time become apparent and drone music gets an almost spiritual quality. Yet the military feeling of the drone is not entirely out of the picture. After all in defeating time the drone is our weapon.

Historical Mobility
Erkki Huhtamo, Professor of Media History and Theory at the University of California Los Angeles, is one of the keynote speakers at. Having read some of his work of video game archaeology I was curious about what he had to say about the diorama. In this lecture Huhtamo attempts to demonstrate the continuity and change of the diorama as a medium and as a concept. The diorama is an extension of the panorama and an early example of “moving” (transforming) images. Over time both technology and concept are appropriated and adapted to fit in the changing media culture. Throughout his presentation Huhtamo emphasizes that the diorama is very present in our current media culture. In it's (appropriated) technological form we still have diorama's as part of the educational experience of museums in a combination of 'reality effects' and scopic environments of for example the cavemen (both larger then live or in miniature scale).

Yet as a concept the presence of the diorama is not so easily visible. Huhtamo gives us an account of the bourgeois spectator who were marvelling at the spectacle the diorama presented. The actual form of the diorama created a significant shift in spectator ship. Contrary to the panorama (where the spectator was to walk around to view the work) the diorama presuppose the audience to be immobile letting the spectacle wash over them. This shift form flannery and mobility to a captivation by the screen is still apparent in today's cinema culture (Lev Manovich has written extensively about this in The Language of new Media). Although Huhtamo notices a move back to mobile spectator ship with the advent of locative media. The continuity of the notion of the diorama is quite clear in Huhtamo's presentation. Yet we should keep asking ourselves how tracing back one concept and technology adds to our current knowledge and theory on media culture. Although it can be interesting to explore the historic precedents of our media we should always be aware of the choices the researcher makes in the objects of research. As Huhtamo exclaims the purpose of media archeology is to uncover 'forgotten' line between yesterday, today and tomorrow. 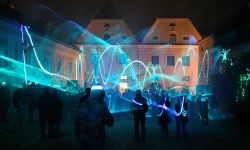 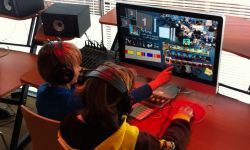