7 okt 2008 — ​In the Heart of the West (Westerliefde) at the Westergasfabriek site, venue for PICNIC’08, the vast majority of the Hot100.

The HOT100 are the most promising and passionate new media and creative media talents in The Netherlands gathered for an inspiring day: to exchange ideas, to learn from professionals and to network. As early as 8 am, the first of the Hot100 candidates were welcomed into a decorated hall, where white chairs in large circles and big red balloons signified this was to be a social day, celebrating talent and creativity.

The day kicked off with breakfast in the PICNIC Club (Gashouder) where the Hot100 could meet early awoken professionals and the other Hot100 candidates, before getting a tour of another Virtueel Platform project: E-Art. In a white dome, ten Dutch and four foreign organizations exhibited their work, focusing on three, very current, themes: the environment, social networks and mobile technologies. Annet Dekker, coordinator for E-Art, explained they consciously chose to put smaller organizations in the limelight for this event, and introduced several of the exhibited projects to the Hot100 candidates. In the afternoon, the Hot100 gathered to prepare for a debate on ‘collaborative creativity’ later in the day. Divided into three groups, the candidates discussed how innovation can be achieved through collaboration between creative people, from a commercial, an artistic, and a research or educational point of view. Each group nominated a spokesperson for the debate with the four speakers invited by Virtueel Platform to present on this topic.

E-Art
Striking in the dome erected especially for the E-Art showcase was a glasshouse, devoid of glass, containing an array of green and white speckled plants: the Variegata Set-Up by Frank Bruggeman. The by humans cultivated misfits of the vegetative world, these plants would go extinct in the wild, because they are much weaker than their fully green leafed counterparts. Perhaps it is difficult to see what plants have to do with e-art, but if you take this to mean innovation and manipulation of art (and culture and the world really) by means of technology it makes much more sense. Manipulation was also found in It’s Always Six O’Clock by Eva and Franco Mattes, a painting of a Second Life avatar, flat on a table, with little anime figurines placed on top of it, paintbrushes in hand. Or in Virtureel, an old-fashioned typewriter connected to a monitor, which displays the letters according to input. Press harder and the letters become bigger, stay for a while and see the letters deteriorate on the screen. SunRunSun is a project by Yolande Harris in which she assigned sound patterns to satellite signals. With the aid of headphones and a GPS device you can walk around, which induced these ever changing sound patterns depending on your location. Whether the projects were based on the environment, on mobile technologies or social networks, they all seem to have in common that they manipulate, and consequently innovate, the world around us, online and offline. Through the 1iveØnline project we could even manipulate the end of our lives, by continuing to live online in an ever-growing conceptual network of ideas, tastes and descriptions. Making use of associative networking, the software develops a dynamic profile of the user, which could continue to expand, long after the person ceases to be capable of submitting data.

Hot Presentations
Stefan Agamanolis Of course an event like the Hot100 needs some hot speakers as well. First up was Stefan Agamanolis, Chief Executive and Research Director of Distance Lab in Scotland. He named his presentation ‘Dueling with Distance’, because instead of dealing with distance, we are constantly fighting it. There is always too much or too little of it. Agamanolis emphasizes the need for a change in the way we communicate with each other. Our use of mobile phones and the Internet can be compared to fast food. Efficiency over quality, the ability to use the same products anytime anywhere in the world, our communication lacks depth. He senses a growing need for slow food – gourmet food, homecooking traditional ingredients – and introduces slow communication in the same fashion. Imagine being under water, wearing a helmet to block out vision, the water surrounding eliminating all sound except for the person you are talking to using high tech telephone technology. It could be the telephone box of the future. Distance Lab used the experiment to research how the form of a device affects the outcome of the communication. People tended to be more creative and lost their sense of time. This means that in the future specific devices could be created for specific types of communication, and consequently make it more meaningful.

Werner Vogels Being Vice President and Chief Technology Officer at one of the most successful online companies, Amazon, you can assume Werner Vogels knows about business. But does he also know about creativity? For Vogels, being creative means venturing into new projects and rethinking strategies. He says Amazon is an innovative business. It experiments constantly: externally by for instance changing the lay-out of their website (which did not prove very successful); internally by giving customer service representatives more tools to work with to improve the whole sales process. New plans are made in so-called ‘pizza teams’ which include employees from various divisions of the company. Collaboration exists between employees, but also between the company and its customers. The customer reviews for Amazon’s products on the website are an example of this.

Martin de Ronde OneBigGame is a creative collaborative project of epic proportions. Martin de Ronde, who has worked in the videogame industry for a considerable amount of time, is involved in this charity project. Inspired by Bob Geldof’s BandAid and Live Aid projects from the eighties, this organization gathered some of the most talented and famous game designers to work on mini (flash) games. The platform would for instance host a small version of games like World of Warcraft or Halo, and Charles Cecil, creator of many adventure games, is supposedly working on an adventure game version of Minesweeper! De Ronde proves here that having a good network around you can come in handy, but having a good idea and some business skills will get you just as far. He mentioned that it makes more sense to find a way to turn five euros into twenty-five euros before giving it to charity. He also advised not to be afraid of your competitors, but to collaborate with them, because it can prove to be fruitful. OneBigGame seems a good example of collaboration between people who would never normally meet, because they are restricted to a company or because they are too busy for instance. This project shows that it can be done.

Loїc le Meur Seesmic is a website that hosts video conversations. Create an account, hook up your webcam and sound and record all your (crazy) thoughts and ideas, and share them almost instantaneously with other Seesmic users all over the world. Of course you will have to be interesting, or funny, or the CEO of Seesmic to get replies within a 20-minute presentation. Loїc le Meur was all that. Even though at first I wondered what was new about Seesmic compared to other webcam platforms such as Stickam, I quickly realized this is not about ‘being on cam’. This is about fast communication in a personal manner. Perhaps even a step towards what Stefan Agamanolis calls slow communication even though the videos appear on the Seesmic website almost in real-time. Seesmic is collaborative in the way Le Meur runs his company. In full transparency. Every decision he makes, every consequence that decision has, will appear on Seesmic within seconds. He can ask people how to run his company, and people tell him. Seesmic is, compared to similar platforms, still quite a small-scale company, but is growing fast. I wonder if the friendly, transparent, cozy atmosphere can last.

Hot100 Debate After some of the Hot100 candidates took the stage to pitch their ideas or projects to the group in six minutes, the white chairs and various red balloons (some of them floating after experiments with bottles of water) were rearranged to form a fishbowl setting, spokespersons and speakers in the center. The debate was moderated by Claudia Rodriquez Ortiz and was supposed to be about collaborative innovation, as discussed before the presentation. The debate quickly turned idealistic.

First, collaborative innovation was discussed from a commercial point of view. The debaters focused on collaboration between companies and individuals and mentioned how (web 2.0) companies often make use of input from outsiders, but their creativity is never rewarded. New ways of thinking and doing business are needed to establish a more equal collaboration.

That collaboration is a good thing, everyone seemed to agree on. There should be more of it, and it should start in primary school! Dutch primary education now is not an education but simply a selection tool for further education, and when young people get to university, they have no idea what is going on. Of course they have no idea, because universities lag behind when it comes to innovation. They follow strict programs, instead of letting students research what they are really interested in. The debaters mentioned that passion is a crucial element of collaboration, and should be focused on more in education and research. Groups need to be gathered and ordered by team member type (leader, planner etc.) and interests.

The spokesperson for the artistic viewpoint turned the debate completely idealistic. He mentioned that a situation of crisis is where innovation starts, and even a small change can have a major effect on the world. Inspiration for research or commerce can be found in art, but the problem is that artists are usually individualists. Goals are needed, and concluded was that you can only collaborate if people see something in your goal. Collaboration works on different levels. You sometimes need a personal approach to get someone to see your goal; you will sometimes have to convince someone your ideas are worth developing and collaborating on. You will have to look further than your own field of expertise, and mix disciplines - in research and in commerce. Concluding remarks such as “produce with our hearts” showed me the Hot100 is a group of talented, passionate, multidisciplinary, creative people who want to innovate, discover, and perhaps even want to change the world.

Asking some of these people why they are ‘hot’ their answers were doubtful. Perhaps their confidence would have grown if more business cards were swapped. And maybe that happened - and I would like to know - but in the closed off workshop setting of the event and the immense size of the PICNIC Club Hall, the Hot100 were not always very noticeable. Of course, collaborative creativity with the Hot100 is still possible, since they can all be found on the biggest collaborative creative project of the world, the Internet. I am curious to see how these people will innovate and change the world for the better.

Check all pictures at: http://www.flickr.com/photos/v-p

How Do You Do 2011: openhartige gesprekken met digitale helden 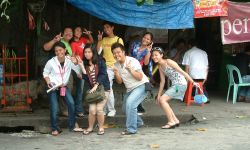